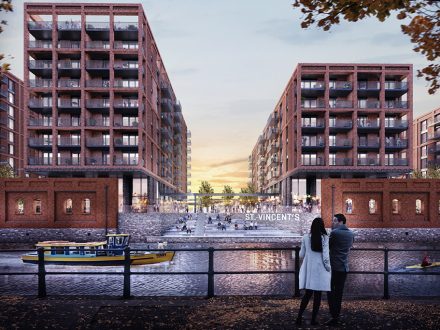 A plan to construct 371 properties, a faculty and scholar lodging in Bristol has been given the go-ahead.

Housing minister Stuart Andrew mentioned the advantages of reasonably priced properties and the event of land that was falling into disrepair had been sturdy causes to green-light the £375m growth, dubbed the Silverthorne Lane masterplan.

A fifth of the deliberate properties, constructed throughout 4 blocks starting from seven to 10 storeys, might be classed as reasonably priced. The proposals additionally embrace the event of a 1,600-pupil-capacity college, two scholar lodging blocks for 693 college students and 25,000 sq. metres of workplace area throughout two buildings.

The scheme covers six plots within the Temple Meads space. Developer Sq. Bay, which owns the positioning, submitted the proposal in tandem with the College of Bristol, builders Studio Hive and Atlas Land, schooling belief Oasis Group Studying and the Division for Schooling. Sq. Bay mentioned the plan would create 4,335 jobs over the following 10 years.

The plan wanted ministerial approval following considerations that the proposed housing would have a heightened flood threat, and that the plan may injury some buildings of heritage within the space.

In his overview of the proposal, Andrew resolved that “all dwellings” could be above the flood degree and any threat of excessive water could be restricted to the automotive park, workplaces and staircases.

“The secretary of state agrees that the decrease carry/stairs space, if flooded, wouldn’t battle with the flexibility for the precise residential areas to stay protected as a refuge space or present entry to the high-level walkway and subsequently on steadiness this might be acceptable in flood-risk security phrases,” the assertion mentioned.

Issues over heritage centred on quite a few listed buildings – together with one that’s Grade II-listed – a few of that are being redeveloped and others that might be affected by the brand new growth. The minister agreed that the plans may represent “modest hurt” to quite a few buildings, however resolved that the housing advantages outweighed these considerations.

“The regeneration proposed, mixed with the lively restoration of a few of the listed buildings, would rejuvenate the positioning and breathe lively life again into it, and that the retention of 10 key buildings, which might be more likely to be misplaced with out lively use, would even be a advantage of the proposals,” he mentioned.

The green-lit masterplan joins different substantial initiatives to get the go-ahead in current weeks. Final month, a £200m masterplan to develop 603 build-to-rent properties and 65,000 sq. toes of workplace area in Southampton received approval from the local council.

In the meantime, plans had been submitted in February to extend the so-called Warrington Town Centre Masterplan by including 900 further residential properties and a lodge to a regeneration scheme within the metropolis. That scheme is price £99m.